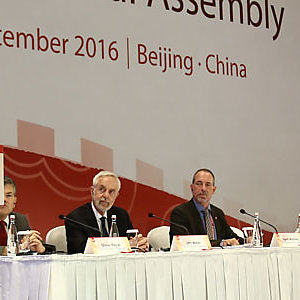 President Xi Jinping of China underlined how “standards have become the common language of the world” in a written message addressed today to the 39th ISO General Assembly in Beijing. The message was delivered by Zhi Shuping, Minister of the General Administration of Quality Supervision, Inspection and Quarantine (AQSIQ) of the People's Republic of China.

“With the deepening of economic globalization, standardization is playing an increasingly important role in facilitating business transactions, supporting industrial development, promoting scientific progress, and regulating social governance,” he said. “Standards have become the common language of the world.”

The Chinese President pointed out in the address how standards facilitate innovative development and lead the way for progress in our times. “International Standards are the major technical foundation of the development of a global governance system and the development of economic and trade cooperation.”

President Xi Jinping went on to deal with the role of standards in China. “China will actively implement the strategy of standardization,” he wrote. “We will promote innovative, coordinated, green, open and sharing development with the support of standards. Together with all countries in the world, we are ready to deepen cooperation in standards, enhance exchanges and mutual learning, and improve the system of International Standards.”

In conclusion, the Chinese President told the delegations of ISO member countries in his written message: “I hope that the participants of this assembly will pool wisdom and build consensus to jointly explore the active role of standardization in improving global governance and promoting sustainable development, so as to contribute to a better future of mankind.”

The ISO week in China is being held from 10 to 14 September 2016 in Beijing, China. This year’s agenda includes meetings of the ISO Technical Management Board (TMB), the ISO Council and the ISO Committee on developing country matters (DEVCO), as well as the annual 39th ISO General Assembly followed by an open session on “Standards improve global connectivity”.

The week-long event is being hosted by SAC, ISO’s member in China, and includes more than 500 delegates from more than 120 ISO members and representatives from 15 international organizations. Together, these individuals will participate in interactive discussions that will shape the direction of ISO’s future products, services and systems.